Poor Larissa! She's in great, great need, dire even. If she doesn't soon receive some of the White Russian of human kindness, she may have to return to her old career: posing for the Turkish popular music industry! 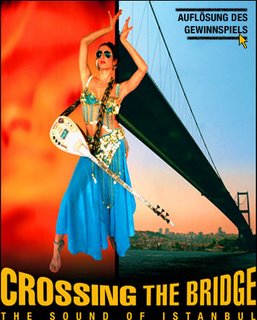 Email ThisBlogThis!Share to TwitterShare to FacebookShare to Pinterest
At last, an internet! We returned a good week ago, and our welcome home was a bravura display of characteristic New Mexican incompetence. None, not one of the business with whom it is our misfortune to interact was able to grasp that we would be gone for a month. "EEEhhhh," brayed the post office clerk (the classic New Mexican accent is a hybrid of Cheech Marin's with Frances McDormund's in Fargo), "your carrier never got the hold. Your mail's maybe in the box, I guess." Likewise, a volunteer fire department that stopped us on our drive in due to "a motor vehicle accident" (silly me, wondering if perhaps a bullock-cart had collided with a hang-glider): some very un-fire-fighterly legs showed beneath the hems of some none-too-reflective jackets; messages were given to and traffic directing duties exchanged with other teeneage females who happened to drive by; emergency vehicles idled in the road with ther lights off, invisible in the inky downpour*. And, to cap everything, on our first trip into town we were rear-ended by a tourist. A month of whitewater, climbing, wilderness peaks, unsociable megafauna, but we didn't begin fearing for our lives until the Rio Arriba County line.

Ah well, the weather here is splendid, feels more like the Oregon coast than high desert. New Mexicans never take green for granted, and having all our usual dust bowls and withered sedges doused with so lurid a colour is pleasant and surreal. Other consolations for coming home have included the opera, viz. Salome, which provided everything I came to see, great singing from the principles, wonderful orchestral playing and a straightforward, undistracting production. We'll be at Massanet's Cendrillon on Thursday, last of the season for us. I'm a little sorry not to see Ades' The Tempest, but not much.

We also went to a very good film last night, in all likelihood even better than our second choice, which was of course Snakes On A Plane. Crossing the Bridge is a documentary about Istanbul's numerous music scenes: psychedelic rock, arena-Mevlevis, Turkish rap by Ceza. I actually rather liked the latter. Turkish seems to vocalize about twice the number of syllables as English, so the tone-twisting of Turkish rap is quite impressive. Ceza speaks pointedly against the gangsta associations of U.S. rap; for him and for the rest of the often very punkish musicians in the film, the music does not seem to be drug-fueled like its American counterparts. "God punished hip-hop with me!" Hear for yourself (parent page). Ceza's charming, arrestingly sweet-looking sister contributes a rap of her own.

Much else: Siyasiyabend, a very folksy, Dylan-ish singer songwriter, street musician, who is a mean hand with a santoor; a Turkish B-movie star turned saz player and songwriter. Kurdish diva Aynur sings (sample, parent) with some modern influences but excellent technique; I love the way Middle Eastern singers can draw out a perfect high note with no vibrato at all (very difficult) until at last they let the vibrato emerge with perfect control, bringing the note to a climax. Brenna MacCrimmon is another one to look for: a Canadian, while travelling in Romania and Bulgaria she unearthed many ancient vinyl singles of Turkish musicians, and dedicated herself to resurrecting the songs. She reminds me of another bloody good cd, Istanbul 1925, old recordings of Turkish nightclub music. The film also shows a mindblowing Romany session, with clarinet, violin and ud competing at breakneck speed.

One of the most charming and touching performances is given by Müzeyyen Senar, a splendid old battle-axe fronting an old-fashioned Near Eastern big band (think 'Umm Kalthoum, if that means anything to you). With a milky glass of raki** in hand she sings (quoting from memory), "They say the tables are stained with lovers' sin and wine. I've been drinking since I was four minutes old: that is my sin." She swings the glass upside down in careless arcs, smiles, downs it in one gulp.

The Turks are not Arabs!

*Local emergency response: I hate to tell you, but if you're ever in an accident, it is not all right to assume local responders are competent. The closest look I've ever had at a major accident was in western Montana. A woman was lying crumpled more or less in the rear trunk of her small car; a wide splash of blood had flown from her head. A very competent friend of mine stabilized her spine. Just then, the authorities showed up and proceeded to take an agonizing amount of time about things; calling for pieces of equipment, then having found them changing their minds and sending them back; bickering between different agencies. When at long last they were ready to lift her out of the ruined car onto a stretcher, only my friend noticed that the EMTs has inadvertently attached her neck to the car with the cervical collar. It was not until the had lifted her body several inches and wondered why her neck and head weren't following that they heeded my friend's objections. The moral: if you're still conscious, keep an eye out for your own ass!

**Raki: I house-sat a couple times for our friend Phillipe, a Lebanese gentleman who had somehow found his way to Magdalena, New Mexico. He used to go home for Christmas in Beirut; he would, he said, when the family interaction got too stressful, get out of town and go to Baghdad to relax. Once, I was still at the house sweeping the floor when he returned. Opening a bag, he asked in his deep Levantine voice, "Would you like to try some raki? I must apologize, it is my uncle's home-brew, not very strong, perhaps 170-proof." It was. A lot of Arabs aren't like the Arabs either, if you follow me.

What good is an Internet if it can't tell me how big Ichthyosaurus numismalis was?
Posted by Odious at 12:07 PM No comments:

This is exactly how I am right now:

I once bought a HUGE Pixy Stick at an amusement park. It was about as wide as a soda can and maybe two feet tall. I'd only gotten through half of it and I was completely out of my mind. At one point I was on a roller coaster, and in my Pixy Stick-tripped out mind, the ride was rolling way too slowly, and if I hadn't been strapped in I would have gotten out and pushed.

So if you haven't heard from me, I still like you, but my life needs a lot of pushing right now.
Posted by Odious at 11:14 PM