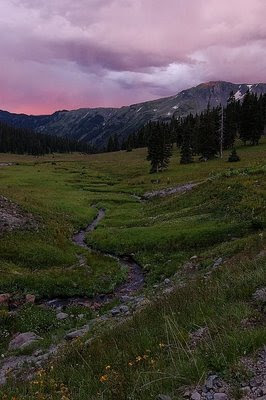 I've just added a gallery to my photo site from my backpacking trip last week in Colorado's South San Juans. Check it out.
Posted by Peculiar at 9:48 PM No comments:

Email ThisBlogThis!Share to TwitterShare to FacebookShare to Pinterest
Labels: Colorado, Mountains, Photography
A pretty good food meme: The Omnivore's 100, that is, 100 foods a self-respecting omnivore should try before he dies. Not all of them are commendable, which is as it should be.

I come in at a respectable 67%. But I agree with Rod Dreher that the real fun is to add five of your own picks to the list, especially as the original list is adventurous only in a rather predictable vein. My additions:

Update: Hmphhh... just realized that the list already has black pudding, which is essentially synonymous with morcilla. So strike that. Instead, let's go with morels.

Email ThisBlogThis!Share to TwitterShare to FacebookShare to Pinterest
Labels: food 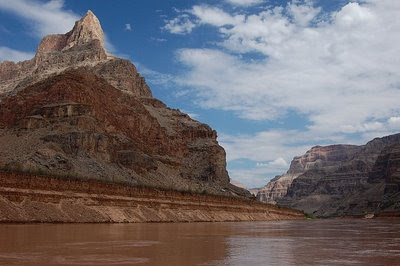 One of the most interesting parts of my recent Grand Canyon trip was floating past the usual takeout at Diamond Creek and continuing all the way to Lake Mead. I'd never seen this lower stretch before, and it was certainly very beautiful and pretty fascinating. I do not, however, recommend it in August: our daily highs were somewhere in the neighbourhood of 115 F. 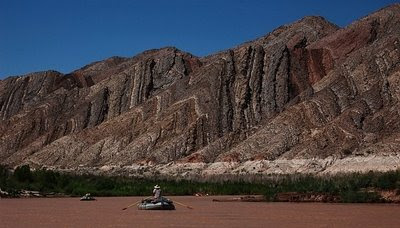 The water level in Lake Mead is currently very, very low. Note the bathtub ring in the photo to the left (click photos for larger, better versions). This was well out within the theoretical perimiter of the so-called lake, and the ring represents the old average pool. This location is also at least 20 miles dowstream of where my map informed me was current's end at the Lake's historic low. Clearly, we've been breaking records for years and years! To add to the general amusement of the place, there were feral bulls wandering about on the river bank. 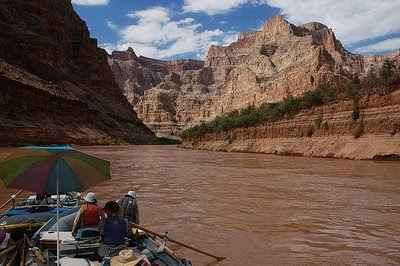 Unsurprisingly, the name of the game in the Lake is silt. At the Lake's historic high backwater, still well within the Grand Canyon proper, we began seeing banks of silt covering the river's true banks, and as we continued downstream they grew higher and more extensive. Not infrequently, a section would collapse in our view, avalanching dirt into the river and kicking up prodigious clouds of dust. 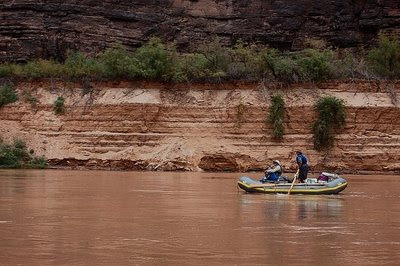 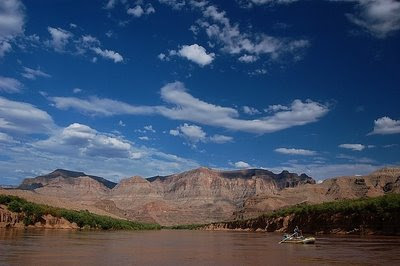 Once you come out of the Canyon into the flats, the silt really spreads out, into a vast plain covered in tamarisk and willow, corresponding of course to the shape of the former reservoir. The old takeout at Lake Mead was Pierce Ferry; the Pierce Ferry boat ramp is now over two miles from the river. Thankfully, things are livened up around here by a new rapid which has been forming and changing frequently for the past couple seasons. In addition to providing amusement, the Pierce Ferry rapid also provides a near perfect, small-scale illustration of the principle of canyon cutting by superposition (for a full account, read about the formation of Lodore Canyon here). 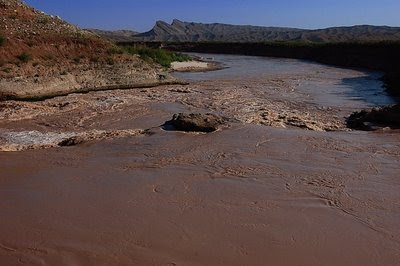 What's going on here is that, as the Lake level has dropped, the river was not left with its former basin, but rather with the new expanse of flat silt. Unconstrained by its old banks, which are now deep beneath dirt somewhere, the Colorado could meander over the plain rather freely. In many areas, the river of 2008 is far from its old channel. Of course, the current quickly began cutting down and eroding its silty bed, thus fixing its new course somewhat. But in a couple spots, such as Pierce Ferry Rapid, it hit bedrock outcrops a short ways beneath the surface. In the adjacent photo, the silt plain is clearly visible to the right; the bedrock is forming the boulder in the middle and the pourover and whitewater to the sides where the river flows over it. It's probably being eroded very fast; I'm told the rapid is seldom quite the same from one week to the next. The rapid is also much bigger than it looks in this rather dismal snapshot: for instance, the center boulder is easily 25 feet wide, and the whitewater is plenty capable of flipping a loaded boat. 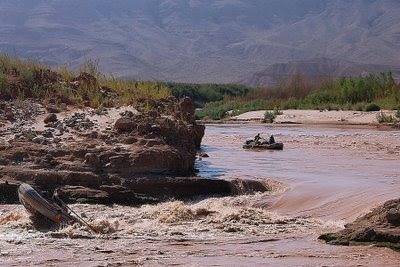 One of our party running the right channel.

Definitely enlarge this one!

If you imagine a much bigger plain and a lot more bedrock in the picture, it's easy to see how a river becomes entrenched in its own course and incises its meandering path deep into stone. 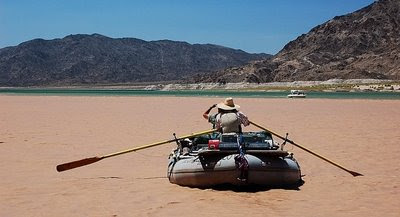 Also interesting is where the river finally ends. Current's end is not a gradual process at all; it's almost as abrupt as if someone snapped a chalkline across the water. Upstream, the water is brown and cold; five feet downstream, it's green and warm. The silt is still coming, still settling in. You have to see it to appreciate fully the extent of the siltation problems facing Lakes Powell and Mead. 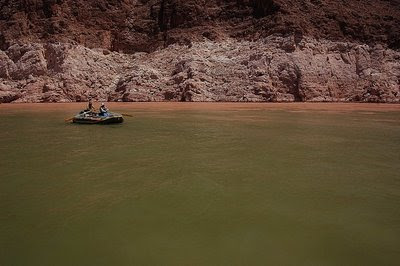 The Colorado comes to a halt.

Email ThisBlogThis!Share to TwitterShare to FacebookShare to Pinterest
Labels: Geology, geomorphology, Grand Canyon, rivers
A true savant in action: this guy draws most of Rome from memory after one helicopter flight.

Email ThisBlogThis!Share to TwitterShare to FacebookShare to Pinterest
Labels: art

Update Mrs. P, who's been in a very Lovecraftian mood of late, reports the excellent line from Call of Cthulhu:

There was a bursting as of an exploding bladder, a slushy nastiness as of a cloven sunfish...

Posted by Peculiar at 6:44 PM No comments:

All right, naturalists: can anyone tell me what this is? Found in our bathroom a few evenings back. 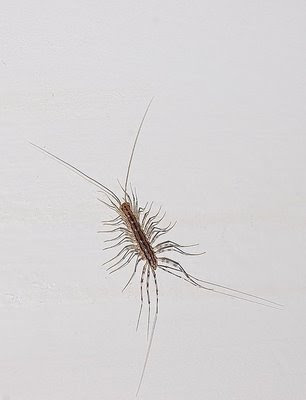 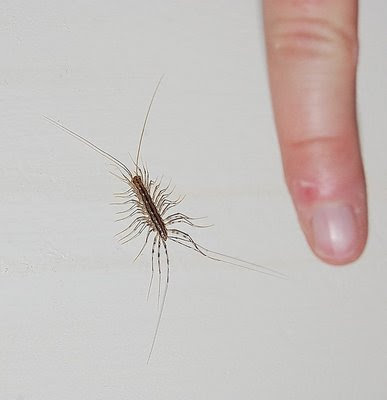 Email ThisBlogThis!Share to TwitterShare to FacebookShare to Pinterest
Labels: invertebrates
Of course it exists: Mountain unicycling. 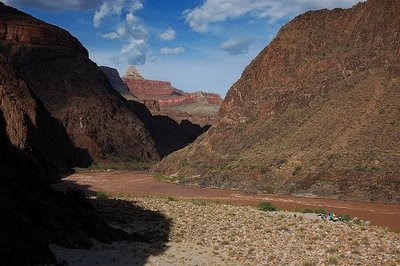 I'm back. With any luck I'll muster some mildly coherent verbiage in a couple days. Grand Canyon was great, as always. Above is our camp just below Phantom Ranch, Zoroaster Temple presiding (as always, click for a larger, better version).

Posted by Peculiar at 6:28 PM No comments: