The Querencia folks have a fun meme going: name the ten books which had the biggest influence on you. Influence is an interesting question, since influences are decidedly not the same as favorites. I think my list would have to run as follows (roughly chronological in my life):

J.R.R. Tolkein, Lord of the Rings: I'm not ashamed to be a nerd. And quite a lot of my personality is in there: philology, history, myth and epic, ethnography, poetry, Old English/Norse influence, a sense of loss of the old wonders, wilderness, mountains, rivers. I just re-read it and I still love it.

Hergé, The Tintin oeuvre: World travel, ethnography, archaeology and a great fondness for Britishness (yes, of course I know they're French).

Edward Abbey, The Monkey Wrench Gang: Wilderness and the American West, anarchist sympathies, environmentalism without the sanctimony and pseudo-spirituality.

The Kalevala: If I were really pursuing the thread of influence here, I suppose the ultimate source is the liner notes on Seleniko by Värttinä. Weird folk poetry, epic, non-Indo-European tongues; I think this was my first awareness that there's poetry which really must be examined in the original. And that other languages are much more fun to learn than Spanish. And that that Anon. guy wrote a lot of really good stuff.

David Quammen, Song of the Dodo: This is where I began to get seriously interested in evolution and biogeography. I believe I read Steve's review galleys.

Isak Dinesen, Out of Africa: Travel, adventure and bloody good writing together, that's how to live!

Patrick O'Brian, The Aubrey-Maturin Novels: Again, contains a large percentage of my fascinations, and remains my ideal of English prose. There's a lot of how to live here too, even if you don't have Frenchmen to beat up on.

Camille Paglia, Sexual Personae: Not an approach I'd necessarily favor anymore, but she definitely got me fired up about reading the classics and exercising the critical faculties.

W.A. Mozart, The Magic Flute [score]: An odd entry, but no one can deny its influence on me. My relationship with music and general creativity, not to mention the inside of my head, has never been the same.

Interesting to note that only two (Huxley and Mozart) had anything to do with school, and Mozart is the only entry from the St. John's College program. Orthodoxy is notably absent, but not everything is about books; a few books were mildly influential there, but nothing was decisive. At least eight remain favorites, which is nice (might have to revisit Brave New World). All the other favorites wouldn't be favorites without these.

Honorable mentions: The New World by Frederick Turner: sci-fi can be so much more than gadgetry. Also, David Roberts and Craig Childs: outdoor adventure for people whose brains outmass their other glands. And of course Bodio, though I had the good fortune to get him through spoken word and excellent dinners more than through printed pages. And I have him to thank for four of the listed ten.

Perhaps you read in the paper today, as I did, about a "new species of hominid" found in the Altai. Interesting find, to be sure, but the "new species" part is seriously dubious. Anthropologist John Hawks explains why.

Thanks to the Atomic Nerds for the tip.

Happy Ada Lovelace day. In honor of this iteration, I wrote some code today--which actually compiled. I mark this day with a white stone, indeed.
Posted by Odious at 8:25 PM 2 comments:

Mrs. P and I are off for a four-day weekend running the Gila. It's been quite a while since I ran a river not knowing what was around the bend. This huge El Nino snowpack is providing an excellent window for boating a run that's seldom runnable. Reports soon, with any luck. In the meantime, check out my new photography blog, which is finally more or less ready for public consumption. 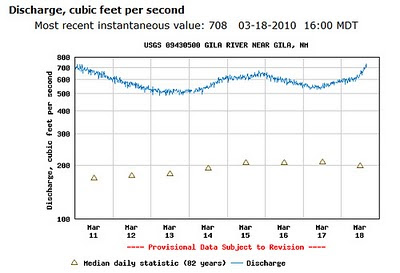 Posted by Peculiar at 4:13 PM No comments:

Also from China: Phallic cemetery in the Tarim Basin. Anything from the Tarim is intriguing: home of Tocharian language and tartan-clad mummies.

Update: Changed link to much better NYT piece. Read it!

Posted by Peculiar at 3:01 PM No comments:

Email ThisBlogThis!Share to TwitterShare to FacebookShare to Pinterest
Labels: archaeology, China
The Sanest of Men: a celebration of the Chinese poet T'ao Ch'ien.

I live here in this busy village without
all that racket horses and carts stir up,

and you wonder how that could ever be.
Wherever the mind dwells apart is itself

a distant place. Picking chrysanthemums
at my east fence, I see South Mountain

far off: air lovely at dusk, birds in flight
going home. All this means something,

something absolute: whenever I start
to explain it, I forget words altogether.

Posted by Peculiar at 1:09 PM No comments:

Over 200 years ago an outraged Lord Sandwich rose purple-faced in the House to shout at an opponent. “Wilkes, you will die either on the gallows or of the pox.” “That,” drawled John Wilkes without a pause, “must depend on whether I embrace your Lordship’s principles or your mistress.”

Found in The Corner.
Posted by Peculiar at 6:04 PM No comments:

Saw this about the aurochs, meant to mention it, and then forgot about it again until I was reading Cronaca.

Scientists have analysed the DNA of ancient giant European wild cattle that died out almost 400 years ago.

They have determined the first mitochondrial genome sequence from aurochs (Bos primigenius) from bone found in a cave in England.

Posted by Odious at 6:12 PM No comments:

Humans worsted by pigeons at the Monty Hall problem

On the other hand, 12 undergraduate student volunteers failed to adopt the best strategy with a similar apparatus, even after 200 trials of practice each.

Posted by Peculiar at 2:33 PM No comments: