Handy advice for dealing with anachronistic vocabulary in historical fiction.
Posted by Peculiar at 10:17 PM No comments:

Email ThisBlogThis!Share to TwitterShare to FacebookShare to Pinterest
Labels: linguistics, literature
A little foodblogging: Tonight we tried an appealing recipe for "Pear-Shaped Meatballs Stuffed with Creamy Eggplant." I don't really feel like putting the effort to plagiarize it whole, and if this sort of thing appeals to you, you'd be be well advised just to find a copy of The Cooking of the Eastern Mediterranean by Paula Wolfert. She locates this recipes origin as Aleppo; it seems very Turkish to me, though perhaps it represents a strain of Arabic cuisine I haven't been fortunate enough to experience. (Virtually every Levantine restaurant I've visited in the western U.S. has left me thinking, "Surely Arabs must occasionally eat something besides hummus, tabouli, falafel and dolmas." But it is the mountain West in question, so I'm sure there is indeed more out there.)

This is something of an inversion of the dish karnıyarık ("riven belly"), which is a large eggplant stuffed with meat and other goodness. In this instance, one fries some small eggplants and stuffs them into the (nicely seasoned) meat, leaving the stems exposed: 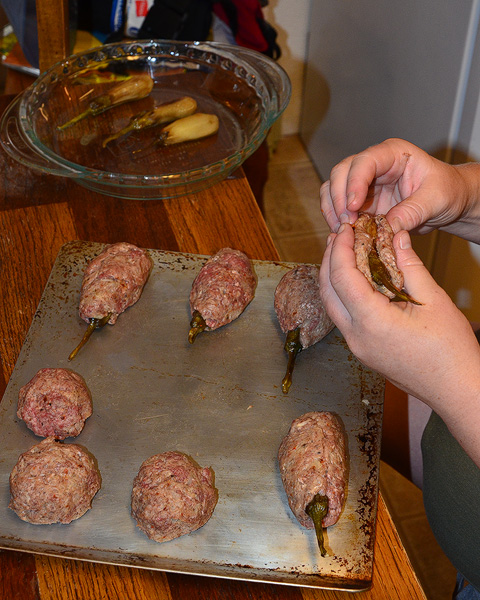 Then you fry them a bit: 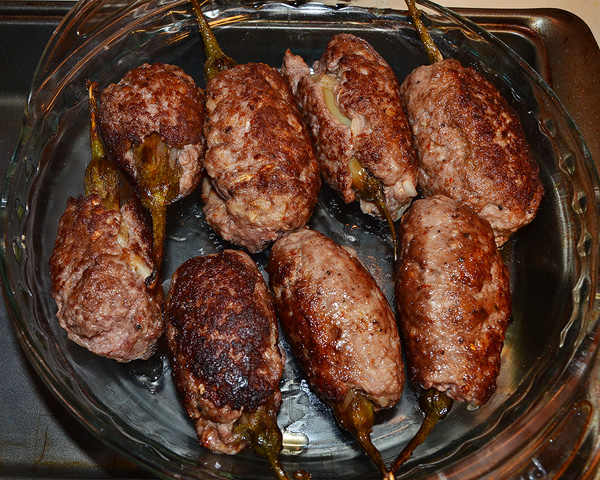 Make up a sauce from tomatoes, onion, garlic and seasonings: 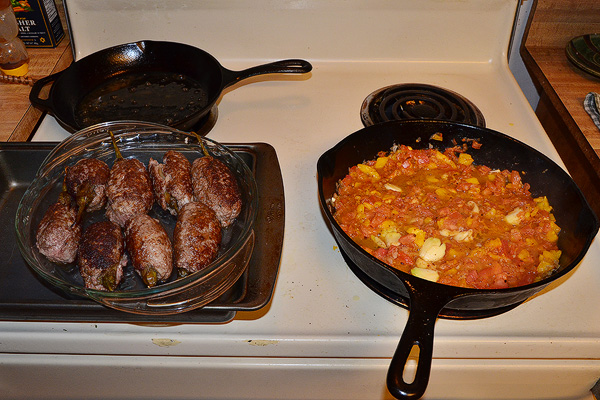 Pour the sauce over the meatballs, bake for half an hour and serve: 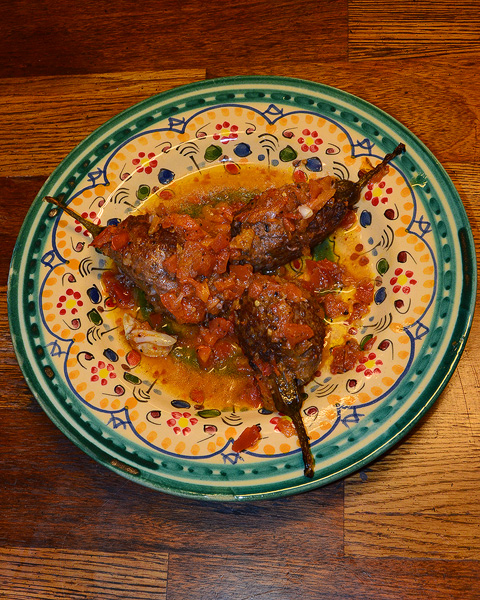 Recommended, especially if, like me, you enjoy eggplants but wish to downplay their vegetable nature.

Wolfert calls this dish "ormuk kebabi," but a Google search for the phrase produces only a single irrelevant website in Hungarian. Ormuk certainly sounds Turkish rather than Arabic, but my casual searching has only found the word to be a) the name of a volcano near Lake Van [pg. 6] and b) "A fine, soft fabric, made of the hair of young camels in Turkestan." My curiosity is piqued.
Posted by Peculiar at 9:52 PM 3 comments:

Two chatbots chat with each other.

Cheap content from Atomic Nerds! Bold for what I've read (no italics, since the only book I've started and not finished is The Fountainhead--which I have since--sigh--completed. Substance is no substitute for style.)

1. The Lord Of The Rings Trilogy, by J.R.R. Tolkien. Damn straight.

2. The Hitchhiker's Guide To The Galaxy, by Douglas Adams

8. The Foundation Trilogy, by Isaac Asimov. All of them. Even the ones after the trilogy that had incomprehensible telepathy.

11. The Princess Bride, by William Goldman

12. The Wheel Of Time Series, by Robert Jordan

17. Stranger In A Strange Land, by Robert Heinlein

18. The Kingkiller Chronicles, by Patrick Rothfuss

20. Frankenstein, by Mary Shelley. The best book about writing and the regret that follows. What, you thought it was about children?

21. Do Androids Dream Of Electric Sheep?, by Philip K. Dick

22. The Handmaid's Tale, by Margaret Atwood. Assigned in my junior year of high school. A lot more impressive then.

23. The Dark Tower Series, by Stephen King. Fine, italics. The first and no others.

25. The Stand, by Stephen King

27. The Martian Chronicles, by Ray Bradbury

29. The Sandman Series, by Neil Gaiman. Entirely responsible for my goth phase, about which no further information will be given. There are no pictures.

30. A Clockwork Orange, by Anthony Burgess

32. Watership Down, by Richard Adams

34. The Moon Is A Harsh Mistress, by Robert Heinlein

35. A Canticle For Leibowitz, by Walter M. Miller

38. Flowers For Algernon, by Daniel Keys

40. The Chronicles Of Amber, by Roger Zelazny

41. The Belgariad, by David Eddings. The worst LotR clone since Terry Brooks.

42. The Mists Of Avalon, by Marion Zimmer Bradley

43. The Mistborn Series, by Brandon Sanderson

45. The Left Hand Of Darkness, by Ursula K. LeGuin

51. The Hyperion Cantos, by Dan Simmons

56. The Forever War, by Joe Haldeman

58. The Chronicles Of Thomas Covenant, The Unbeliever, by Stephen R. Donaldson

59. The Vorkosigan Saga, by Lois McMaster Bujold. Worthy of every Nebula they won.

61. The Mote In God's Eye, by Larry Niven & Jerry Pournelle

62. The Sword Of Truth, by Terry Goodkind

63. The Road, by Cormac McCarthy. This and not Blood Meridian?

65. I Am Legend, by Richard Matheson

66. The Riftwar Saga, by Raymond E. Feist. What's more, I've been to Krondor.

67. The Shannara Trilogy, by Terry Brooks. And the other books beyond the first three. I just don't know why.

68. The Conan The Barbarian Series, by R.E. Howard. I never saw these as wish fulfillment; rather, as the explication of a peculiarly Texan philosophy of life.

69. The Farseer Trilogy, by Robin Hobb

71. The Way Of Kings, by Brandon Sanderson

72. A Journey To The Center Of The Earth, by Jules Verne

73. The Legend Of Drizzt Series, by R.A. Salvatore. Ha! One nerd-bullet dodged!

75. The Diamond Age, by Neil Stephenson

78. The Dispossessed, by Ursula K. LeGuin

79. Something Wicked This Way Comes, by Ray Bradbury

81. The Malazan Book Of The Fallen Series, by Steven Erikson

82. The Eyre Affair, by Jasper Fforde. My sister liked this, so I didn't read it.

84. The Crystal Cave, by Mary Stewart

85. Anathem, by Neal Stephenson Bad style, and three for eight on interesting ideas.

88. The Thrawn Trilogy, by Timothy Zahn. Not proud of that one.

89. The Outlander Series, by Diana Gabaldan

90. The Elric Saga, by Michael Moorcock

91. The Illustrated Man, by Ray Bradbury

92. Sunshine, by Robin McKinley. I was pleased to see Sunshine here; it's McKinley at her best, which is very good, and is often under-rated.

93. A Fire Upon The Deep, by Vernor Vinge

94. The Caves Of Steel, by Isaac Asimov

99. The Xanth Series, by Piers Anthony. Way too many of these, sadly.

100. The Space Trilogy, by C.S. Lewis. Nice to see these get some recognition.
Posted by Odious at 8:46 PM No comments:

Posted by Peculiar at 6:10 PM No comments:

Two Oddities of the Snake Range

I recently enjoyed an overnight backpack in eastern Nevada's Snake Range (probably better know as Great Basin National Park). Anyone interested in seeing my attempts to capture Nevada's beautiful landscapes would do well to look in on my photoblog (and keep checking, I've got quite a backlog). But two things I've learned since I returned merit mention here on Odious and Peculiar.

What do Neal Stephenson's Anathem and the Snake Range have in common? They're both connected to the 10,000 Year Clock project:

...a huge Clock, hundreds of feet tall, designed to tick for 10,000 years. Every once in a while the bells of this buried Clock play a melody. Each time the chimes ring, it’s a melody the Clock has never played before. The Clock’s chimes have been programmed to not repeat themselves for 10,000 years. Most times the Clock rings when a visitor has wound it, but the Clock hoards energy from a different source and occasionally it will ring itself when no one is around to hear it. It’s anyone’s guess how many beautiful songs will never be heard over the Clock’s 10 millennial lifespan.

The Clock is real. It is now being built inside a mountain in western Texas. This Clock is the first of many millennial Clocks the designers hope will be built around the world and throughout time. There is a second site for another Clock already purchased at the top of a mountain in eastern Nevada, a site surrounded by a very large grove of 5,000-year-old bristlecone pines.

Read the whole thing. I don't generally care for people mucking about with the landscape in indulgence of their own obsessions (see Christo and his planned hybrid of nuisance and eyesore which he wants to inflict on the Arkansas River), but this is pretty damn cool:

Carved into the mountain are five room-sized anniversary chambers: 1 year, 10 year, 100 year, 1,000 year, and 10,000 year anniversaries. The one year anniversary chamber is a special orrery. In addition to the planets and the Earth's moon, it includes all of the interplanetary probes launched during the 20th century, humankind's first century in space. Among others, you'll see the Grand Tour: Voyager 2's swing by of Jupiter, Saturn, Uranus, and Neptune. The Clock will activate and run the orrery once a year on a pre-determined date at solar noon.

It's one of the better things I can imagine filthy rich people doing with their money. And in regard to the Nevada site, as much as I love the wilderness of the Snake Range, the area they're talking about is already impacted by mining and attendant road access. This is probably the only time rich outsiders purchasing an old mining claim might be good news. Mount Washington, the planned clock site, is visible below, towards the right, three ridges back and lighter than the other peaks (limestone, not quartzite). 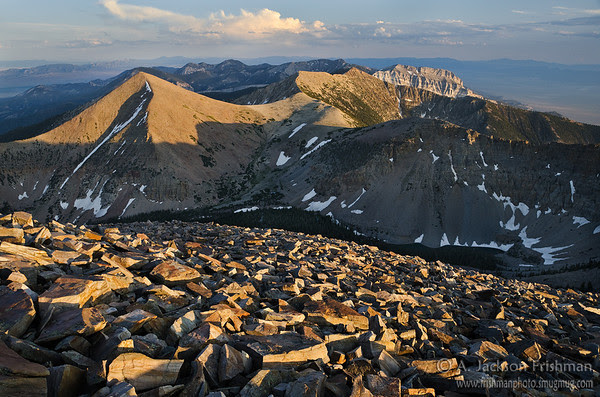 Seems like a good site to me. And the Texas clock will surely be the coolest thing in the state, and may even provide some public access to a region that's mostly off-limits.

For those who haven't read Anathem, the Stephenson connection is that he was asked to imagine such a clock, and those imaginations developed into the central conceit of the novel. (And what's more, I have just learned of the existence of Anathem music.)

Only vaguely apropos, on my recent sojourn in the Snakes I photographed an odd timberline flower which caught my eye, and only later realized that it appears to be Holmgrem's buckwheat (Eriogonum holmgrenii), an endemic unique to the Snake Range: 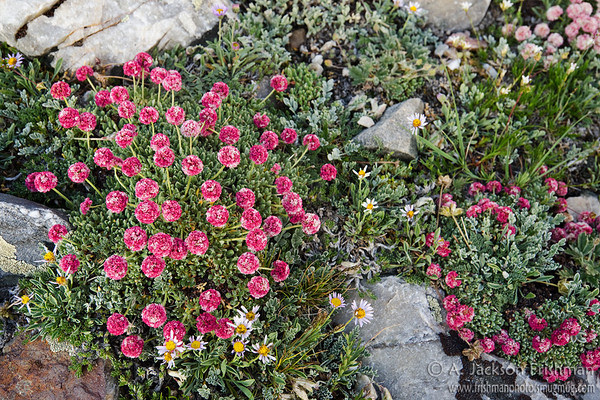 Here is a tidbit from Tony Anderson's (excellent!) Bread and Ashes which will be of interest to fans of Central Asian culture:

The way became very steep and we led the horses, thank God, while Rezo encouraged them with strange Ratchuelian cries of 'Achoo!' and 'Brrr!'....

This is of interest because, while the scene is in Ratcha, i.e. the Caucasus of northwest Georgia, anyone who has ridden a horse in Mongolia* will recognize these commands as the Mongol words for "Giddy-up!" and "Whoa!" Perhaps not amazingly surprising, given the central events of Mongol history, but interesting to see it far away and in liguistically very different country.

*Not too ridiculous a clause, given that this blog does in fact have a few such readers.
Posted by Peculiar at 3:56 PM 1 comment:

Moro Rogers indulges my batrachophilia. I am pleased and grateful!
Posted by Peculiar at 8:53 AM No comments:

Singing bird pistols (link may expire)
Posted by Peculiar at 9:17 PM No comments:

Email ThisBlogThis!Share to TwitterShare to FacebookShare to Pinterest
Labels: gadgets, oddities, words fail
Flight of an eagle owl at 1,000 frames per second
Posted by Peculiar at 5:14 PM No comments:

Email ThisBlogThis!Share to TwitterShare to FacebookShare to Pinterest
Labels: birds
A photographic treat to brighten up your day: Paul Nicklen’s gallery of leopard seals. Amazing!
Posted by Peculiar at 11:45 AM No comments:

A film is in the works about Miss Elizabeth Hawley, Kathmandu's keeper of all mountaineering knowledge.
Posted by Peculiar at 6:10 PM No comments:

World's largest fungus discover in China
Posted by Peculiar at 3:18 PM No comments: