AfriGadget. I particularly like the windmills. And the bicycle/grindstone.
Posted by Odious at 5:56 PM

Email ThisBlogThis!Share to TwitterShare to FacebookShare to Pinterest
Labels: gadgets

Taking down a sperm whale by hand.

Via Deep Sea News, of course. There's video, too, as well as another giant squid!

Email ThisBlogThis!Share to TwitterShare to FacebookShare to Pinterest
Labels: cephalopods, oceans, whaling
To return to somewhat more elevated themes, we're having a very nice time with the Odiouses and their numerous animals. And it turns out, despite myriad indications to the contrary, that if one perseveres westward through Oregon, there is indeed a very large body of water at its edge. Odious and I went there yesterday, where we were entertained by many obliging birds, old growth trees, waves and waterfalls. 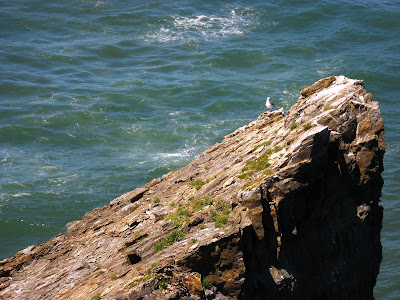 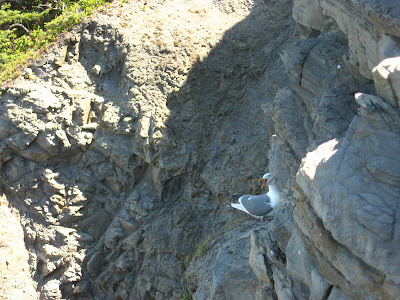 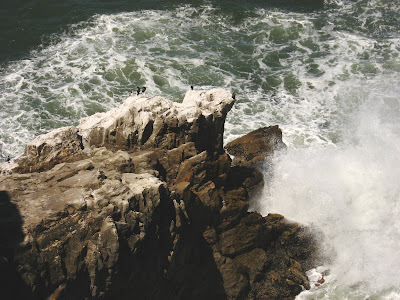 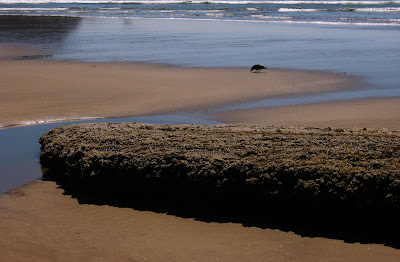 The pelicans were reluctant to be photographed, but the anemones had little choice: 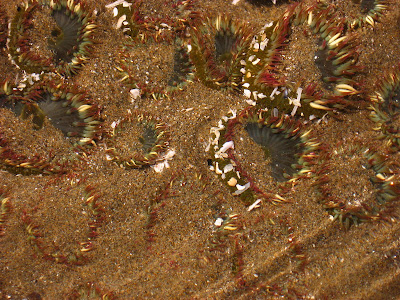 Notes from the Road

We're in Oregon with Mr. and Mrs. Odious now, and quite a time it was getting here. Our car ran hot up through Wyoming, and when we took it to a dealership in Bozeman, MT (mistake, I know), we were brusquely and unhelpfully informed that it had a bad head gasket and required a $1,900.00 repair. Inasmuch as two grand would be very ill-spent on an '88 Subaru with 225,000 miles, we sought a second opinion. A much more helpful mechanic quoted us $900 for the gasket and the likelihood of a warped head and sundry related irritations. A 50% improvement for driving a quarter-mile wasn't bad progress, but we were referred to a man down the road who ran a Subaru junkyard. After gleefully wasting an hour of shop time idly telling us about Subarus' general qualities, he strongly advised us not to mess with the head in any way, guaranteed to be cracked, can of worms. "What you need is a new radiator." Turns out Subaru radiators only hold a quart of fluid when new; ours was probably down to less than a pint to cool four cylinders pulling a very heavy little load. He put in a new used radiator in an hour (Happy Birthday, my sweet wife!), and spiked it with a tablespoon or so of black pepper, a trick of Alaskan motorists that allegedly seals minor coolant leaks. We took a test spin up Bozeman Pass, 70 mph, passing semis, A/C running, better than it's driven in years. Total bill: barely over $100. Competence is so satisfying to witness these days.

Mrs. Peculiar a few thrills on the drive, sights formerly never seen. She saw her first really enormous, torrential waterfall in Wyoming, and not long after she saw her first mountain goat near Beartooth Pass: 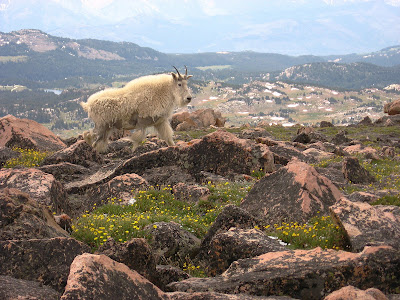 And some days later, we both stumbled upon the much-recounted delight of the annual demolition derby in Salmon, Idaho. Tales of the legendary intermission event have been related for years, but most people assume that such doings cannot happen in our time. In eastern Idaho, however, legends remain.

Pinky, the moral victor, off to an inauspicious start: 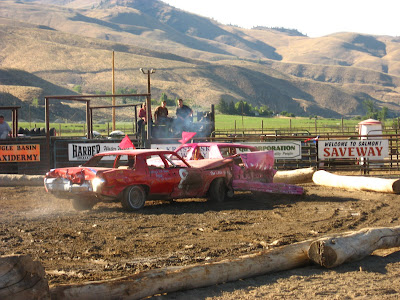 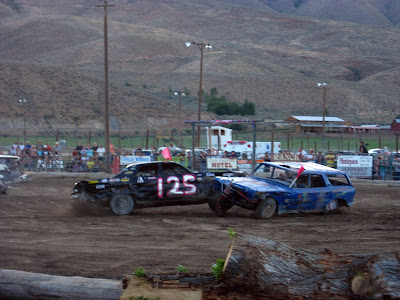 But demo derbies, though always laudable, are common enough. The particular pleasure of Salmon's event comes halfway through, with a contest wherein local teeneagers may show their heroism. Two boys to a motorcycle: one drives, one wears a balloon taped to his helmet and wields a bat. The rest should be obvious. 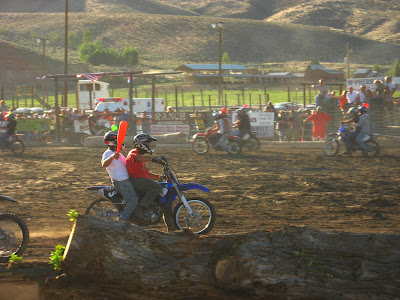 Though plastic bats seemed to be regulation, a couple weapons on the field did not look so plastic. Three separate fistfights broke out, and the contest at last came down to two teams whose disqualification was somehow not justified. 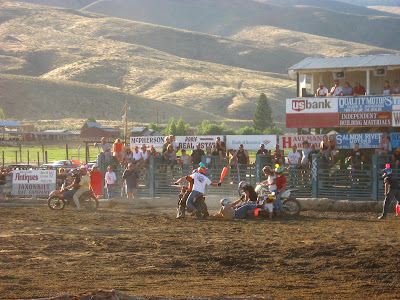 When the derby proper resumed, Pinky proved remarkably tough, somehow surviving several heats and assuming an ever more accordian-like form. He did not win, but he was definitely the first car into Valhalla. 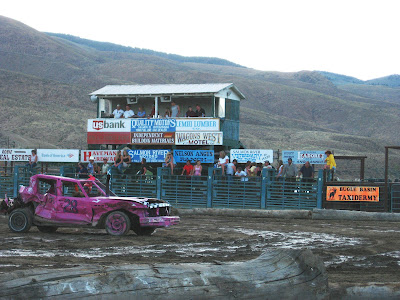