Apologies. But 'twas apt: I recently journeyed from this: 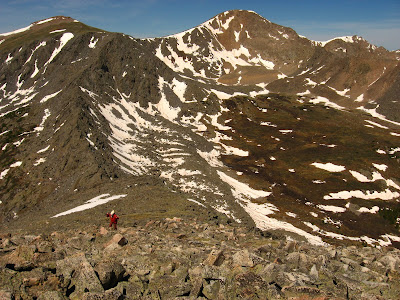 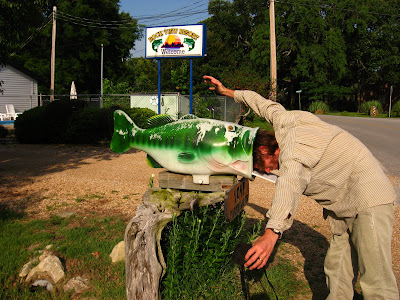 Fortunately, I also returned again, sorry though I was to travel home without a single Dolly Parton lollypop, which I initially took for a succubus with burning eyes and bleeding nipples. Many other marvels and wonders also remain unvisited. Very sad indeed were we to decline a kind Ozark invitation to light our fireworks at a big cat refuge on the Fourth, surely an ideal venue for pyrotechnic revelry.

We did however enjoy some truly excellent tapas in Dallas, and had a delightful stay with Reid, who assures me that there are some really wonderful river floats to be had in Missouri. And the flight from the midwest to Denver was oddly delightful. One passes dreamlike over the clutching effusion of greenery that is east Texas, through a Euclidean hallucination of square acreages and trigonometric circle-pivot fields, into the dendritic fractal landscape of eastern Colorado's slowly eroding plains, at last reaching the Wagnerian welcome of the Rockies.

In Montana at the moment, and off to Oregon and Odious tomorrow, on the wings of newly-installed used radiator (Mrs. Peculiar's birthday present). Blogging next from there, in the best of company.

Badgers? Badgers? We don't need. Anyway. This fellow has it about right.

Hey there laddie, got a licence for that thing?
Posted by Odious at 11:21 PM No comments:

Where's Athanasius when you need him? From Tinkerty-tonk, "I am both Muslim and Christian":

Shortly after noon on Fridays, the Rev. Ann Holmes Redding ties on a black headscarf, preparing to pray with her Muslim group on First Hill.

On Sunday mornings, Redding puts on the white collar of an Episcopal priest.

She does both, she says, because she's Christian and Muslim.

And also because she doesn't understand why exactly the Arians cheesed off the church so much.

In truth, this is exactly the sort of thing that cheeses me off, too. A refusal to deal with the hard questions...

Redding doesn't feel she has to resolve all the contradictions. People within one religion can't even agree on all the details, she said. "So why would I spend time to try to reconcile all of Christian belief with all of Islam?

"At the most basic level, I understand the two religions to be compatible. That's all I need."

...and use our God-given reason to deal with the logical incompatibilities of these faiths. I honestly don't understand this refusal to examine one's beliefs. As with Old Father William, I certainly acknowledge that there comes a time when any inquiry must practically end. But I would argue that this contradiction is far from that point. This is just intellectual laziness.

I will also note that, as an Episcopal priest, she doubtless confesses the Nicene Creed at least weekly. Which, as one might note, mentions Jesus Christ as "the only Son of God", not, as Rev. Redding would have it, that "Jesus is the son of God insofar as all humans are the children of God, and that Jesus is divine, just as all humans are divine — because God dwells in all humans."

I really need to get to work on my quatrains.
Posted by Odious at 10:46 PM 1 comment:

Scientists in Costa Rica have run a plasma rocket engine continuously for a record of more than four hours, the latest achievement in a mission to cut costs and travel time for spacecraft.

NASA astronaut Franklin Chang-Diaz, said on Wednesday it hopes to use its rocket engines to stabilize space stations in a few years, and then to power a trip to Mars within two decades.

Email ThisBlogThis!Share to TwitterShare to FacebookShare to Pinterest
Labels: Mars

Two worthy tidbits from the execrably authored The Wandering Scholars by Helen Waddell:

Han Yu, whose friends washed their hands in rose water before opening the manuscript of his poems... rid his province of a large and pestiferous crocodile by addressing to it a written censure, committed to the river along with a pig and a goat, a censure still regarded as a model of Chinese prose composition

Puts one in mind of the incident in Eyrbyggja Saga when a malignant ghost is exorcised by bringing a formal Icelandic legal action against it.

...for it is outrageous that a strictly abstemious reader should sit in judgement on a poet rather drunk.

Occasionally tuna mania overtakes an auction. Hiroyasu Ito, the president of Chuo Gyorui, the biggest of the wholesalers and auction houses in terms of sales volume, tells me of a January morning in 1999 when an Oma tuna came to auction through his firm. It appeared to be the perfect tuna, a vision of true kata.

The tuna weighed 200 kilos. At ¥100,000 per kilo, the possessed bidder had paid ¥20 million—the equivalent of more than $170,000—for a fish whose parceled meat could never recoup that amount.