Nobody thinks clearly, no matter what they pretend. Thinking's a dizzy business, a matter of catching as many of those foggy glimpses as you can and fitting them together the best you can. That's why people hang on so tight to their beliefs and opinions; because, compared to the haphazard way in which they're arrived at, even the goofiest opinion seems wonderfully clear, sane, and self-evident. And if you let it get away from you, then you've got to dive back into that foggy muddle to wangle yourself another to take its place.

We visited this ruin last weekend, in a very out-of-the-way corner of northern New Mexico. People live around here their entire lives and never pass through this area. The cliff house above was located about 800 feet up the side of a heavily forested canyon. There was running water in the bottom, but it had just snowed the night before, so I don't know whether the stream is perennial. Here's the ruin with a little more context: 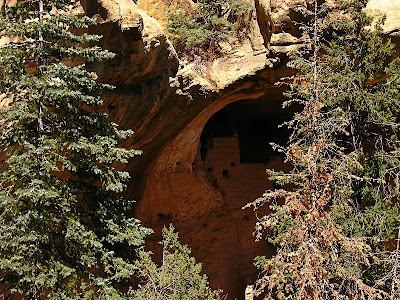 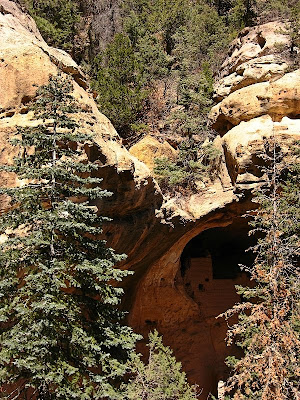 It's a pretty lush spot by New Mexican standards: in addition to the usual ponderosa, Doug fir and scrub oak, there were also spruce and true firs.We only found one little pictograph panel, but I like it: 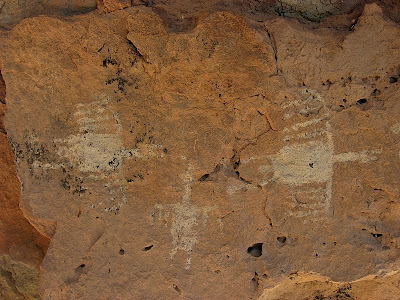 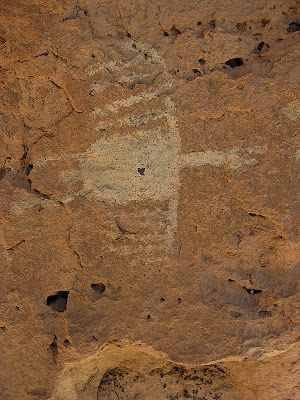 Despite their enthusiasm for painting birds, these people, the Gallina, were not a culture you wanted to be part of:

...scarcely more than a hundred Gallina remains have ever been found, said Tony Largaespada, an archaeologist with the U.S. Forest Service who made the discovery in 2005.

"Almost all of [the Gallina ever found] were murdered," he said. "[Someone] was just killing them, case after case, every single time."

"Why these [victims] were outside the house is kind of a mystery," Largaespada said. "Usually [attackers] threw [Gallina victims] in their houses and burned the houses on top of them. That's the case with 90 percent of them.

"But in this particular case they were thrown in a pile outside the house. … More than likely there are others [nearby]."

Like the six other bodies found at the site—all members of a now vanished culture called the Gallina—Stargazer met a brutal end. Her neck had been broken, with her head snapped back so far that her skull rested between her shoulder blades.

"Her head was forced back so hard that it pushed a piece of [a] vertebra into the back of her skull," Largaespada said. "That was a pretty violent death."

The murder scene is grimly consistent with the few other Gallina sites that have previously been excavated, Nelson added.

"[In] most of what we're finding, someone came through and killed them," he said. "If you find a Gallina site and there's skeletons in it, they were killed."

Also interesting: '"Probably the most famous thing about the Gallina is the towers they made," said Tony Largaespada, a U.S. Forest Service archaeologist. "[People] call them Gallina towers, and they almost looked like medieval European castles."'

Though there were no such towers at the location we visited, the site's defensive aspects were pretty unmistakable, with two separate structures set away from the main alcove, commanding views of the canyon. Here's a rather lousy photo of the upper one: 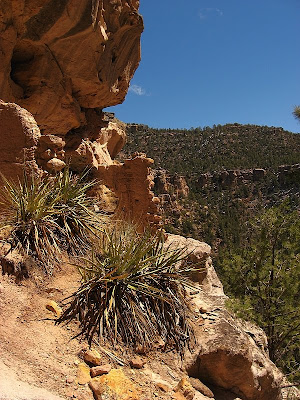 It also seems noteworthy that no modern Puebloans claim any ancestral connections with the Gallina. The Jemez, for instance, seem remarkably vehement on the subject.

To add one final, even more Lovecraftian touch, the site contained several deep holes that reached horizontally back into the sandstone. The largest was remarkably deep, perhaps 25 feet. It seemed as though it extended even further, but was blocked with a large stone that looked for all the world like it was deliberately placed. Another such crevice was similarly blocked. For all the progress in Southwestern archaeology, there's still a lot of room for play of imagination. 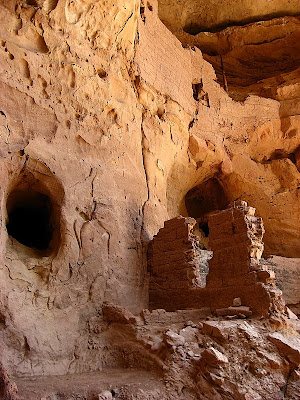 A short film of some very old school rockclimbing. Today's climbers will find it pretty primitive, but even I learned to climb with a bowline around the waist and belaying around the body. However, this is one of those occasions in which progress really does represent improvement. I must say, these folks' technique looks dubious even by 1938 standards. Also, clearly television's catering to the idiots in the audience is no recent phenomenon.
Posted by Peculiar at 10:44 AM No comments:

A new one for the sidebar: Nature Lyrics, the blog of a very fine wildlife and macro photographer in India. For a quick taste, check out his vultures and snakes. Browse the galleries too; among much else there are some excellent sloth bears to be had.
Posted by Peculiar at 1:09 PM

A victory for the anti-mining faction in Crested Butte. Some background here. As I said in the earlier post, I have mixed feelings about this; however, I can't say I'm unhappy about the news.
Posted by Peculiar at 3:15 PM No comments:

Email ThisBlogThis!Share to TwitterShare to FacebookShare to Pinterest
Labels: Colorado, environment, the West

Masai warriors will run the London Marathon. I cannot tell you how much joy this gives me. (ht)
Posted by Odious at 9:36 PM 1 comment:

Email ThisBlogThis!Share to TwitterShare to FacebookShare to Pinterest
Labels: running
It's Christopher Smart's birthday! Or it was, yesterday, when I meant to post this. Most people know For I Will Consider My Cat Jeoffry, which is excellent. I will confess that always closest to my heart is the following couplet:

Of all Spring's blossoms I like best
My sunlit wife, herself sun-dressed.
Posted by Odious at 9:25 PM 2 comments:

Email ThisBlogThis!Share to TwitterShare to FacebookShare to Pinterest
Labels: poetry