Anatomical snuffbox. Bundle of His.
Posted by Odious at 2:02 PM 2 comments:

More algae economy, again with the 10% of New Mexico idea. I'm not categorically against this idea, in fact I think it's really worth pursuing. But my concerns about water remain unanswered. This is not the first energy magic bullet I have seen whose advocates blithely neglect hydrological considerations. The oil shale everyone's so fired up about in Utah and Colorado requires substantial amounts of water for processing. Those happy Canadians have a great, big, mostly unallocated river to work with; Utah and Colorado have literally zero water to spare. And one must also consider the water needs of everyone who will move to the area to work on such a project. Perhaps the algae technology can be rigged to conserve its water; but it's an engineering issue which seriously needs to be addressed.

Update: As Jack comments below, apparently the system can work entirely on brackish water. Popular Mechanics lists freshwater usage for the process as zero. Excellent!

Signs you're in Northern New Mexico: 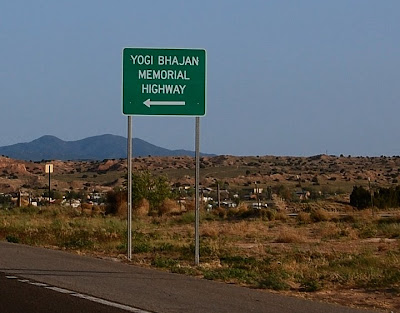 Email ThisBlogThis!Share to TwitterShare to FacebookShare to Pinterest
Labels: New Mexico, oddities
Terry Teachout visits Santa Fe in preparation for the 2009 premier of his opera (well, his libretto). The Letter will be composed by Paul Moravec and is based on a short story by Somerset Maugham. Says Teachout:

If you don't know the plot in any of its various manifestations, take it from me, it's the stuff operas are made of. Lust, betrayal, murder, blackmail...what's not to like? I feel like singing already. Paul and I are shaping it into a very tight structure (ninety minutes, no intermission) that we hope will have the feel of a film noir and the punch of a verismo opera. Think Tosca or Carmen directed by Jacques Tourneur and you'll get the idea.

It's rather gratifying that Moravec refers to Santa Fe as an American Bayreuth. Ongoing progress reports are listed on the right sidebar of Mr. Teachout's web site. This one has a lot of potential. Get tickets early! In fact, 2009 would be a great season to indulge in subscription seats. Besides The Letter, they're doing Gluck's Alceste (more Gluck, please!), Donizetti's L'Elisir d'Amore, Don Giovanni and La Traviata with Natalie Dessay: stellar, and all new productions except the Mozart.
Posted by Peculiar at 4:40 PM 1 comment:

Email ThisBlogThis!Share to TwitterShare to FacebookShare to Pinterest
Labels: New Mexico, opera
Pretty clever for an online quiz:
Posted by Peculiar at 4:40 PM

Email ThisBlogThis!Share to TwitterShare to FacebookShare to Pinterest
Labels: poetry

Things you don't see every day

Since I took the trouble to rant the other day about the spectacular absence of water from New Mexico, of course I immediately go out and find counter examples. Here's a waterfall I visited yesterday, not huge but plenty festive, near El Rito. As good as the waterfall, but much harder to photograph, was the enormous quartzite outcrop that formed the gorge. 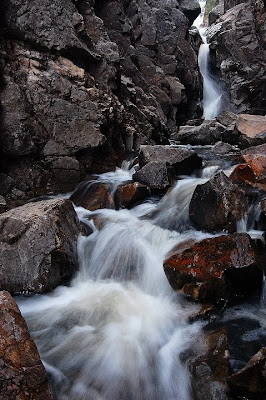 But this was decidedly small potatoes compared to the next drainage over. The Rio Ojo Caliente flows southward out of the Tusas range. A southern outrigger of Colorado's San Juan mountains, the Tusas are consistently the snowiest part of New Mexico, and their snowpack this year was off the charts. The gracery store and a church in Chama actually caved in this winter. But warm weather is here, and the Ojo Caliente, normally a modest creek, is going big. 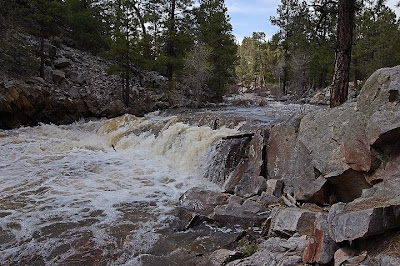 The river is charging like this for miles. These falls were the beginning of a fantastic gorge, full of continuous Class III-IV whitewater, pushy and very fast. 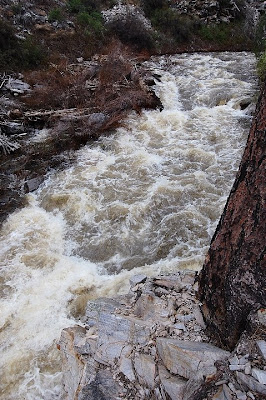 A big rapid. Those two V-waves are much bigger than they look in the photo. 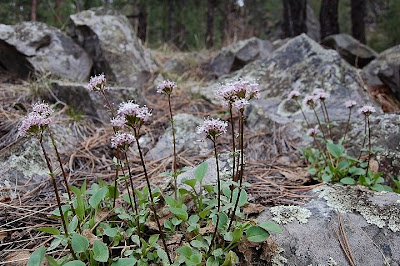 Spring wildflowers on a river bench. 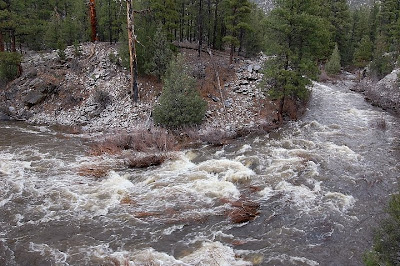 This is not an everyday sight in New Mexico. I have heard native New Mexican children exclaim in great excitement, "Look! The water's almost four inches deep!" This has been a very good year for the north.Incidentally, the headwaters of this river host a truly classic New Mexican village. As I drove in, six cows were crossing Main Street (about eight feet wide) to ransack a garden. I was chased by dogs all the way through town. Splendid place!

The river canyon had no trail and as I was crossing one of many talus slopes a boulder rolled under my feet. After scrabbling a second trying to regain balance, I keeled over onto my right hand, which emitted a very audible snap, like a popsicle stick breaking. I lifted up my hand to see my ring finger pointing a good sixty degrees right of normal, clearly dislocated at the proximal joint. Thankfully, the pain was much less than I would have expected. But the "Holy Shit" factor was high, seeing a body part so far from its wonted environs, and the fight-or-flight response was very strong. I wanted to move, now, to be somewhere else right away. Also, since I wasn't thinking too clearly, I was not quite sure whether the thing was just dislocated or actually snapped through. An initial attempt to pull some traction and put it back in line was not satisfactory. Can I hike out like this? Bad idea. Fortunately, the cerebrum engaged: "You've got to deal with this now, before the adrenaline wears off." All right, brain. I staggered to stabler ground.

It's just dislocated, or it would hurt a lot more, right? Right. I hooked the finger through a loop on my camera bag to achieve a solider purchase, and pulled. Traction in line, then move it smoothly back into position, just like the WFR instructors say. Second time worked like a charm. Next step: extract first aid kit, swallow ten ibuprofen, splint it to the neighboring digit. It's nice to see wilderness medicine theory work in practice, gives you some confidence that they don't just make it all up so your rescuers have something to do while you die, like CPR in the field.

My one regret, a serious regret, is that I didn't stop to take a gruesome picture. At the time I was worried that it would be frivolous and irresponsible; now I feel differently, with posterity to consider. But it looked very much like this, except on the ring finger: 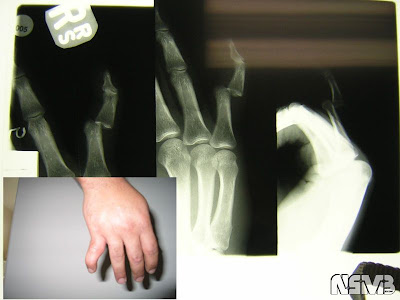 For more New Mexico whitewater, check out the first raft descent of Rio Embudo, just a couple weeks ago. Who says New Mexico has no decent boating?

Who is buried in Friedrich Schiller's tomb?

Lots of people other than Schiller.

Seems like a situation of which he would have approved.

Sketch of
The Analytical Engine

Invented by Charles Babbage
By L. F. MENABREA
of Turin, Officer of the Military Engineers
from the Bibliothèque Universelle de Genève, October, 1842, No. 82

With notes upon the Memoir by the Translator
ADA AUGUSTA, COUNTESS OF LOVELACE


...is well worth your time, if you are the sort of person who said to themselves, 'Ooo! Analytical engine!' when you read that. (ht)
Posted by Odious at 9:22 PM No comments:

Email ThisBlogThis!Share to TwitterShare to FacebookShare to Pinterest
Labels: history, math
"...we could grow all the fuel the United States needs using 1/10th of the land space of New Mexico..."

By covering that 10% into fancy algae incubators. It might not be the worst use for a tenth of New Mexico, provided it's the right tenth. I'd definitely nominate Roswell, Artesia and environs, which have no discernible charm to lose by being converted into algae. I'm sure the stuff also smells better than Artesia does currently.

Seriously, though, I assume the chappy in the link was using New Mexico largely just as a land-area comparison. While southwestern states possess certain recommendations for such a project, viz. lots of sunlight and available open space, they have one major negative: there's no water. None. It's all spoken for. One commenter to the linked post asks, "I wonder what portion of the total area of the state of New Mexico is currently dedicated to growing corn for ethanol. 50%? 75%? 100%? More?" Actually, the state's entire harvested cropland represents only about 1.1% of New Mexico's acreage; irrigated cropland about 0.8% (figures from 2002; these numbers are trending significantly downward, I expect because agricultural water rights are being diverted to residential development). These aren't typos, easterners; we are not Iowa. People from other parts of the country really can't imagine how little water we have around here. The video doesn't address whether the water in these algae tanks can be conserved and reused, but if not, that's a deal-breaker in most of the West. Lots of brilliant ideas for using our open spaces and unexplored resources seem not to consider this inconvenient reality.

Email ThisBlogThis!Share to TwitterShare to FacebookShare to Pinterest
Labels: New Mexico, technology, the West
Some nights ago I was indulging in a nip of red wine and a bite or two of chocolate, when I heard a small voice. "Ahem. I contain ze sulfites." Turned my head, looked around. Assessed the level of the bottle.

"I contain ze sulfites," said the wine. "You should be aware of zis."

"Ah." I poured another glass. The wine muttered a long phrase sotto voce. "What was that?" I said sharply.

"I said," it replied with exaggerated care, "zat I should not be consumed by ze women who are or may be pregnant."

"Ze Surgeons General thought it was important. Zey are smart fellows, you should listen to zem."

Giving up for the moment on the wine, I turned to the chocolate. "Do you have anything to say for yourself?" I asked.

"I'm chock full of antioxidants!" it chirruped. "Ask me about my health benefits!"

"You two," I said, "are getting worse than my breakfast cereal."

"True," I said, considering. "Nobody is worse than the breakfast cereal. Just sitting there on the table, mumbling to itself like Rain Man. 'Vitamin A 25%. Vitamin C 2%, Riboflavin, definitely 35%.' You know, it's talk like this that makes my work a living hell. People are so flipped out about eating well that they're avoiding things for no reason. I had one person--neither coeliac nor intolerant--ask me if it was okay to eat gluten. She didn't even know what it was, and she was worried about it."

"I'm gluten-free!" said the chocolate, before the wine and I shushed it.

"And what is ze gluten?"

"It is an," I enunciated, "ergastic amorphous protein."

"Quite. Real food doesn't even have ingredients! It's just, 'bacon'. Or 'milk'. Or 'bread'. Maybe 'bread with things in it'. But look at you. They've got you spouting off about sulfites and birth defects. O tempora, o vino."

I looked to the bottle, but as it was empty, it had nothing left to say.

...in response to high gas prices, apparently. Once again, your genial host Peculiar proves to be on the cutting edge of history: I've been demanding a camel for quite a while. No dromedaries, please. I need a big, shaggy two-humper that can deal with deep snow. A pair would be ideal.