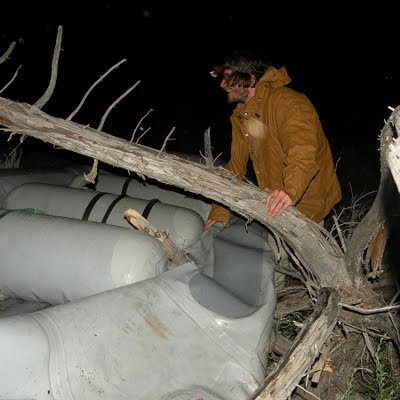 For more detail, check the photoblog.
Posted by Peculiar at 11:04 PM No comments:

Reaching the edge of the Nyiragongo lava lake
Posted by Peculiar at 5:33 PM No comments:

Transportation of live fish in antiquity:

A number of texts from antiquity have contentiously suggested the ancient Romans could transport live fish by sea. For instance, the scientist, Roman officer and historian Pliny the Elder spoke of transport of parrotfish from the Black Sea to the coast of Naples.

[Researchers] estimate an aquarium behind the mast of the ship could have measured about 11.4 feet by 6.5 feet by 3.3 feet (3.5 m by 2 m by 1 m) for a capacity of approximately 250 cubic feet (7 cubic meters). For comparison, an average bathtub has a volume of about 7 cubic feet. If properly maintained, it could help keep at least 440 pounds (200 kg) of live fish such as sea bass or sea bream, they noted.

Cronaca again (who has lots of good stuff lately).
Posted by Peculiar at 12:03 PM 1 comment:

There are some very odd gems in there. I think my favorites are (of all things) the North Korean tribute to Darwin by way of coelacanth, and this Bhutanese yeti confrontation.

Via Cronaca.
Posted by Peculiar at 10:09 PM No comments:

Email ThisBlogThis!Share to TwitterShare to FacebookShare to Pinterest
Labels: cryptozoology, oddities
Worms from Hell: nematodes (Halicephalobus mephisto) found over a mile below the surface in South African gold mines.

Reports of shoggoths will doubtless be forthcoming.
Posted by Peculiar at 6:09 PM No comments:

Email ThisBlogThis!Share to TwitterShare to FacebookShare to Pinterest
Labels: biology

Did the Nazis try to train dogs to talk? If this piece were dated April 1, I'd be very suspicious, and I still am rather. But they were crazy buggers, and even if it's not true, there are some great lines in the article:

"...attempted to build an army of fearsome 'speaking' dogs..." ["Oh God, the enemy wants another treat!"]

"[The Airedale] was said to have speculated about religion, learnt foreign languages, wrote poetry and asked a visiting noblewoman 'could you wag your tail?' The patriotic German dog even expressed a wish to join the army, because he disliked the French."

"...a Dachschund named Kurwenal..." [for the Wagner fans]


"...there is no evidence it ever actually came to fruition and that the SS were walking around with talking dogs..." [You don't say. And neither do the dogs.]