In the course of getting himself snakebit, Chas has satisfied my long-standing curiosity regarding a certain New Mexico toponym. For years I had noted it on the maps, and in January Mrs. Peculiar and I actually climbed Osha Peak in the Manzano Mountains. I believe I have seen Osha elsewhere on the maps too, though further examples escape me at the moment. I had always thought, nay prayed, "Surely no one would name a pefectly good mountain in honour of a workplace safety bureaucracy, would they?" Many strange and dubious tributes do show up at USGS benchmarks, though. So I was quited relieved to learn of "oshá (Ligusticum porteri), a high-altitude plant whose root is used by herbalists for treating viral infections".

Another such burning question, in regard to which the Internet has utterly failed me, was recently satisfied by my uncle, who is very, very fluent in Spanish. The Tusas Mountains, the arm of the San Juans which depends southwards into New Mexico near Chama, are in English the Gopher Mountains. I love these instances in which the Web and its gibbering digital hordes are laid waste and pillaged by genuine erudition. (See also the very worthwhile article on library cataloguing vs. keyword searches, linked by Odious and Matt.)

Thanks Chas, and leave them snakes alone!

The words, they will not come. The Mario Opera. Here's a bit of the synopsis of Act 1 from the site:

Our opera begins a few months after Mario crawls through that pipe in Brooklyn. As far as Mario’s concerned, he’s just an average plumber who has happened to stumble into a surreal fantasy world filled with Mushroom People, smiling hills, super power flowers, and a beautiful Princess named Peach.

Mario and Princess Peach fall in love. Act One begins at their wedding ceremony in the King’s Court, where the Loyal Mushroom Kingdom Subjects are singing and dancing about how excited they are to see two people so much in love. Peach’s father sings a song about how happy he is to have a young, strong man like Mario take over as King.

The tone shifts suddenly when the elite Koopa Army bursts in and demands to be allowed to take part in the festivities. The Loyal Mushroom Kingdom Subjects object, and an all-out-brawl seems imminent. However, as soon as the first punch is thrown, the entire scene freezes except for Mario, who is left standing completely bewildered by the strange direction things are moving. He notices a rumbling sound, and he looks up to see Bowser, the King of the Koopas, towering over him. Bowser and Mario stare hard at each other. Bowser has a huge advantage over Mario: he knows how everything will turn out. Mario, completely confused, has only an extremely powerful instinct to protect the Princess. Despite this, he’s simply no match for Bowser, and the large spiked Koopa King flings him to the ground. The scene comes back to life, and before we know it, the Koopa Army has destroyed the King’s Court and the Princess has been kidnapped.

What else is there to say? But the rest is not silence, alas.

As Spaceman Spiff and any schoolboy are well aware, the main distinguishing features of such languages are an abundance of Qs, Xs and appalling consonent clusters. Blatantly foreign diacritics help too. Some of my ever-present desire for such tongues was assuaged by this press release in Mayan. But imagine my delight upon finding Triq il-Maqluba, an entire blog written in one of the best such tongues: Maltese! I find it utterly fascinating, though I don't understand a word of the language (by the by, the only form of Arabic traditionally written in the Latin alphabet). Especially fascinating is White Knight Syndrome, a rather nice sonnet in Italian, french, English, Spanish, Maltese and German. I'd quote it, but Blogger won't do the diacritics for me.

Equally intriguing, and utterly without explanation to non-speakers of Maltese is the Dino Babes poster.

Email ThisBlogThis!Share to TwitterShare to FacebookShare to Pinterest
One of my best recent finds in the blogosphere has surely been Darren Naish: Tetrapod Zoology. There's really something here for everybody (though I openly confess that his knowledge of cladistics flies some way above my head). Jack was enormously pleased with the Bear-Eating Pythons of Borneo; Kate will likely enjoy The most freaky of all mammals: rabbits (he makes a good case, bunnies are scary). The information in his post on spectacular eagle predation will not come as news to anyone who's ever spent an evening with Steve. Myself, I'm quite pleased with Pleistocene megafrogs and They bite, they grow to huge sizes, they locate human corpses: the snapping turtles. Give him a look.

I mark this day with a white stone.
Posted by Odious at 11:36 PM

Email ThisBlogThis!Share to TwitterShare to FacebookShare to Pinterest
YAFE (Yet Another False Etymology): stoned.

...in addition to these virtues against poisons including those nine flying venoms, the toad's stone, known to the learned as the crapodine and vulgarly as the paddockstane, has also this property. Inscribed with the characters EZERA EZERA ERAVERAGAN GUGVRALTERANI and wound about the right arm with the skin of a lion it protects the bearer against wounds in battle and moreover provides lightness of thought. Eracles possessed such a stone among the twelve upon his breastplate, and thus went into battle joyously, so much so that his companions called him mad.

(Side note: Hubert de Burgh was indicted in 1232 for stealing such a toadstone for Llewellyn of Wales.)

The "battle madness" a toadstone might grant achieved such renown that men who went baresark were called "be-stoned", both for their ravings and their apparent invulnerability. By 1500 the word was used for violent drunks; by 1722 we find Daniel Defoe using it in Moll Flanders in its modern sense.

eighty-six
mall
Posted by Odious at 12:50 AM No comments:

Email ThisBlogThis!Share to TwitterShare to FacebookShare to Pinterest
Mt. St. Helens is showing some serious geology in action: 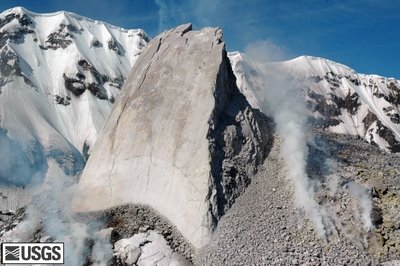 It's also engaging in some rather dramatic collapses: 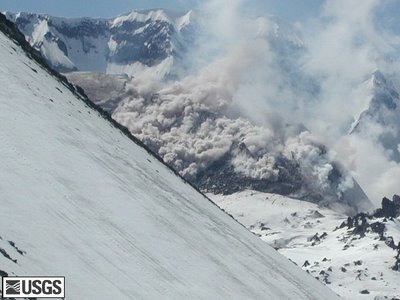 The USGS has a decent little animation of several frames in sequence; the main USGS St. Helens "current eruption" site is here; and here's the Forest Service's Volcano Cam. (Ain't the Internet great?) It may be worth checking in on these sites for a while.

(Hat tip: SummitPost, which has a nice selection of pics.)

Email ThisBlogThis!Share to TwitterShare to FacebookShare to Pinterest
From the comments on this post at Ms. Seipp's I found out about Scientific Gospel, with whose songs and mission I agree and disagree (I can't think of how to put it less cacophonously) on a number of points, but these lyrics are too good not to quote:

The Father of His Country

They've made some observations on our Y chromosome
Reflecting ancient nations and genes that strayed from home.
The message in the bases is sixteen million men
Have DNA with traces of common origin.
We find them in each nation where Genghis Khan once rode.
The simplest explanation is they're the seeds he sowed.
The general direction of Mongol ravishment
Just followed his erection across the continent.

You hear them hooves a' drummin'; the Mongols on a raid.
It's Genghis Khan a' comin' and he's looking to get laid.
Now Genghis was a leader whose armies conquered all,
And even greater breeder as genes today recall.
With every new encounter as he rode into town,
If female, he would mount her, in hay or eider down.

Mongolian armed forces could range both far and wide.
Give credit to the horses the cavalry would ride.
Though tired and heavy laden, they'd wait to eat each day
While Genghis and some maiden were rolling in their hay.

When Darwin wrote of fitness, he meant to reproduce.
Y chromosomes bear witness that Genghis could seduce.
And then, of course, survival of offspring is the thing.
Reminding every rival, it's good to be the king!

Posted by Odious at 1:09 AM No comments:

Email ThisBlogThis!Share to TwitterShare to FacebookShare to Pinterest
The pleasant glow of Schadenfreude, over the resignation of the administrator of the OLCC after being arrested driving a wee bit tipsy. Of which I would feel less, except:

Oregon is one of 18 "control" states for liquor, which means the state owns the beverages at some point in the distribution process.

During Kaiser's tenure, the OLCC began a two-year pilot program to allow sales of distilled spirits in separate areas within supermarkets instead of in traditional state-run outlets. So far, the pilot program has brought in more revenue than expected, the agency has said. But it has upset some liquor agents who say it creates unfair competition.

That last sentence made me crack my head against the monitor.
Posted by Odious at 12:57 AM 1 comment:

Requisite silly quiz. Apparently I am a pink haired anime chick. I'd rather be Hagen.

UtenaYou're noble. You're pure of heart. You're a little slow about all the evil men in your life. But don't worry, things will probably work out in the end.Dream on Prince/Princess
Take this quiz!

And to complete my no-original-writing triple crown, I give you the poetry of Erica T. Carter.

Erica has two primary components: 1) a language database that models the relational semantics of English in normal discourse and 2) a collaborating set of programmed libraries that define a grammar for use with the semantic model.

I got there from Erin O'Connor's.

Organelle sheltered nervous.
Growing, hits the terrorist.
Terminating the circuit in some area.
Travels the member.

Travels a time.
Travels the child.
Travels forward the holiday.
Travels a booster.

The little stutter in "waltzzes" is particularly fine.
Posted by Odious at 3:54 PM 2 comments:

If you knew our Continental Correspondent, your mail-box would be as cool as mine.

- The Clothespin Repertory Theatre, the renowned puppet company; and

- Love's Fowl, the acclaimed theatrical production that celebrates the life of:

- The PULCINISTI, her admiration society.
Posted by Odious at 3:48 PM No comments:

Email ThisBlogThis!Share to TwitterShare to FacebookShare to Pinterest
Swifts.

Swifts are probably the coolest birds in the world. I could go on for hours about them. Swifts eat, sleep, breed and feed on the wing. Once youngsters leave their nests they won't land again for two years. Their wings are so long that swifts flap helplessly, stranded like beached fish, should they land on the ground. Their tiny feet look like mouse paws. Their tiny beak hides a gape as huge and scary as a basking shark's, designed to scoop insect plankton from the air for hours and hours at a time. Did you know that young swifts can hibernate during periods of heavy rain? That swifts will fly a thousand miles to avoid a depression and then return when the rain has stopped? Oh, how unbelievably, bewilderingly weird they are.