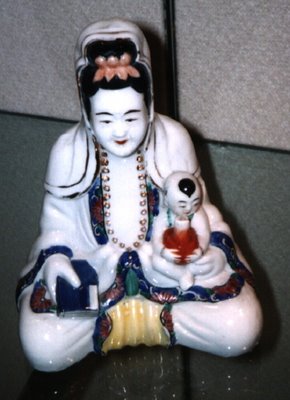 A rather pale bodhisattva, no? Take another look, and think outside the box. That's right, it's the Mother of God with Child and book, as depicted by Japanese crypto-Christians.

The above is courtesy of Laputan Logic, who is back after a long hiatus! Keep scrolling, and check the January and February archives. His posts are long, detailed, abstruse, well-illustrated and consistently fascinating. Recent items include an Arab tale of an African king turned slave turned king again, ancient mathematics, ambergris, analysis and debunking of the "Chinese Vinland Map", naughty mathematical objects, and, best of all, Wilfred Thesiger on transgendered Marsh Arabs. Enjoy!