The brief Grand Canyon experimental "flood" is over.

I find that perhaps my previous comment on the flood was somewhat unclear. A longtime reader and friend writes:

With the caveat that I am a plant ecologist and not a geohydrologist, and am not familiar with the Salmon River, I think the problem with doing flooding experiments with the Salmon is that there is no dam and thus no large amount of water to use to mimic a flooding event with. Sure, someone could (and I hope is) studying the flood cycle of the Salmon River, but for controlled experiment's sake a damned [sic, indeed] river is better.

(Sorry it's taken me a while to reply, but, well, life gets in the way. And I'm not a geohydrologist either, but I've drunk some beers with them on river trips, so I'll try and do my best to answer.)

The problem with doing flooding experiments in the GC is that there is no large amount of water to use to mimic a flooding event, the dam notwithstanding. Releases from Glen Canyon are determined by a bewildering host of factors: agriculture in California; municipal water needs in Phoenix, Vegas and So-Cal; electricity needs in Arizona; our treaty obligations to provide Mexico with 2 million acre-feet yearly; balancing inflow (i.e., snow melt) with diversions in upper basin states while maintaining useful water levels in three major downstream reservoirs and three major and a host of minor upstream reservoirs. Powell Reservoir has been very low for years now, while water demands continue to increase; no water has reached the Gulf of Mexico since 1982. Under these conditions, sedimentation research in the Grand Canyon is very low on the totem pole.

Indeed, the current flood is really just a small bone thrown to conservationists by the Bureau of Reclamation. Other people besides me are unhappy about the experiment. For instance, the Executive Director of the Grand Canyon Trust:

We need high flows to rebuild habitats whenever we get significant sediment inputs from tributary streams, but instead we get rare, “historic” experiments. We need more natural steady flows through most of the remainder of the year to protect spawning and rearing habitat for humpback chub in the Colorado River, but what we get is continued erosion of backwaters and beaches through an almost unbroken regimen of fluctuating flows... if this high flow experiment is part of a package with no more floods for five years and just two months a year of steady flows, then the package will impair the resources in Grand Canyon.

Or the National Parks Conservation Association:

...the experimental plan fails to include follow-up floods, which are critical to ensuring that endangered fish and sandbars are preserved. Instead, it calls for steady releases during September and October over the next five years –essentially locking-in smaller flows from the dam in order to generate additional power – when larger flows might be more beneficial to the park’s ecosystem at other times of the year, particularly in the spring.

This "flood's" 41,500 cubic feet per second for 60 hours is a paltry flood in a drainage the size of the Colorado Basin. And we only get this every four years (the last such experiment was in 2004). I have no doubt that these events do provide a wealth of data for scientists, and are useful due to their closely controlled nature, one data set in four years is a pretty plodding pace of research.

The big thing that's missing in the science here is baseline data for the behavior of sediment in a natural river system of this size. No one thought to look at any of this before the dam went in in 1963. And there is precisely one river system in the same ballpark in the United States unaffected by dams: the Salmon. Lets look at some hydrographs (which I got here). Here is the Main Salmon's high water season (April-July) for the last two years 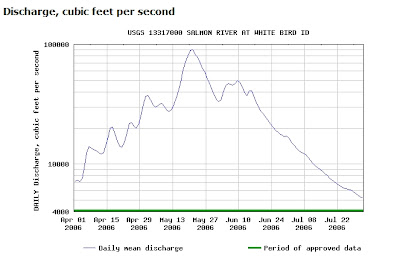 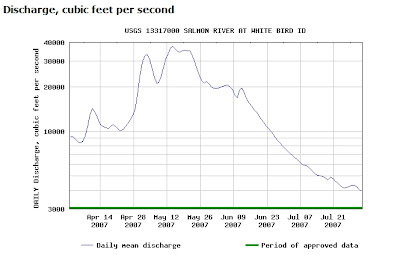 (Note that the scales are not the same; 2007's peak was about 38,000 cfs, while 2006's was over 90,000. That's a ton of water, and the Salmon can go way bigger than that!) Observe how the high flows are spread out over a good three months. Low elevations melt first, it peaks when the weather really heats up, and lingering snow melt and groundwater keep feeding it, stretching out the right end of the graph. Note also the multiple small peaks. 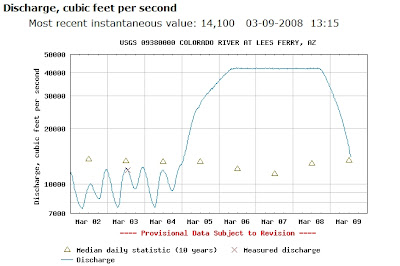 And here's the last 12 months of business as usual at Glen Canyon Dam, with the flood spike at the far right: 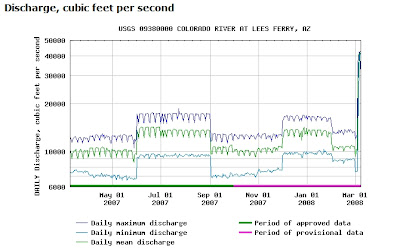 In the flood graph, obviously, we have a sharp rise, a steady plateau and a sharp fall, enormously different from a natural high-water episode. In the lower graph, note that the daily fluctuations are so extreme that they're represented by three separate lines; GC boaters have to be careful when setting up camp to avoid being flooded or having their boats beached. The many little spikes represent weekday vs. weekend flows: they don't need as much electricity Saturday and Sunday when Phoenix office buildings are closed. Note also the increase to power Phoenix A/C in the summer heat.

Is a four day peak long enough to really stir up the sand and put it where we want it? Does the steep right-hand tail of the flood actually do harm by causing beaches to erode into very steep banks, something I've observed non-scientifically in Idaho (Mark Schmeeckle is probably working on this question as we speak)? What would happen if we three one-day floods instead? Is 41,500 cfs at all adequate, or do we really need something closer to historic highs (estimated to have been something like 70,000 to 300,000 cfs on the Colorado pre-dam; again, the Salmon's the only river with at all comparable bed and gradient that gets anything like these flows)? These are the kind of questions which the Salmon's annual natural flood experiment could help answer, without being dependent on the vagaries of western water politics. No, it's not a controlled experiment, but natural scientists commonly use natural experiments to gather data on phenomena for which a deliberate experiment would be irresponsible or impossible. That's how we've gained almost all of our knowledge about things like debris flows, landslides, avalanches and forest fires, let alone earthquakes, volcanism and astronomy.

Also worthy of note is that baseline data for sediment behavior in a natural river system would not be useful only in the Grand Canyon. Lodore Canyon below Flaming Gorge Dam on the Green and the entire Dolores River in Colorado have very similar management issues. I ran Lodore on an experimental flood in 1999 (which was a blast), but there hasn't been another, and we're not likely to see one any time soon. McPhee Reservoir has rendered the Dolores virtually dead for two decades. The Yampa (the last significant undammed river in the Colorado Basin) is also threatened by headwaters diversions and a dam on the Little Snake which would cut off its major source of sediment. Solid baseline data on sediment behavior would greatly benefit conservation proposals for these rivers.

"But what's the point?", you ask. "If the Bureau is so loathe to release a piddling flood for research purposes, we'll never see a flow regime that even vaguely mimics the natural hydrograph." Good point, and alas, very probably true. But you never know: things change. Water issues are only likely to get worse in the Colorado Basin, and if the Colorado River Compact ever comes up for major renovation, conservationists need to have their ducks in a row, with specific proposals instead of just objections. Also, every dam in the Basin is silting up in a big hurry; whether they like it or not, the Bureau is going to have to come up with some new plans eventually, and it would be nice to know how all the silt in the reservoirs is going to behave. Or the drought might even break (hey, I can dream), the dams might someday be looking to release large volumes (as Glen Canyon Dam was forced to do in 1981 and 1983), in which case scientists should be able to tell them how to do it in an ecologically beneficial manner.

You can never have too much data these days, and the Main Salmon is a great place to get some. And there are any number of grad students looking to research their theses is beautiful surroundings*. Grad students, I'm available, I know the Salmon and I'm a good river cook. Science!!!!

*I talked once with a guy who was writing his thesis on box elder trees in Dinosaur National Monument. "So what got you so interested in box elders?" I asked. "They grow here," said he.

Ok, I stand corrected as far as the flows go - I had not bothered to look up hydrographs. Obviously, as you well point out, the question is complicated by the fact that so many people depend on the water and electricity.

Today I read the Army Corps of Engineers regulations on releasing non-normal flows from dams and the sediment loads. Let us just say that the science can only get so far before the lawyers step in and turn it it on its head. Same goes for Yucca Mtn. Unfortunately, this will be teh way things are because we are a planet of 6 billion people who cannot agree on anything. and we all think we are right.